The human body at its purest state alone is restricted, yet technology continues to elevate the threshold of our physical capabilities. Will we ever fail to bridge the gap between our current standards and the seemingly impossible?
By: Nolan Kim

Most trends of improvement tend to rise exponentially during the initial learning process, then level-off gradually after exhaustive development. After Swedish runner Gunder Hagg set the record for the mile-run at 4 minutes and 1.3 seconds in 1945, the world thought to have reached the threshold of human performance. A psychological mystique began to form around the four minute mile barrier – as it remained unsurpassed for almost an entire decade. Presented as the golden boy who would conquer this feat, John Landy disappointingly could not succeed once throughout his 18 months of training and ultimately fell short of the expectations put upon him. He stated that “the four-minute mile is a brick wall, and I shan’t attempt it again.” Meanwhile, 25-year old medical student, Roger Bannister from the University of Oxford had also been training towards the unthinkable.

On May 6, 1954 the University hosted the Amateur Athletic Association for their annual track event. The highlight of the evening? You guessed it – the one mile race. Bannister was first to cross the finish line and as the announcer began to state the time, “three minutes-” the crowd had already burst in uproar. He had clocked in at an official time of 3 minutes and 59.4 seconds.

The reason behind Bannister’s diverging result compared to that of Landy’s? In preparation for the race, Bannister had applied his field of study and had researched the mechanics of running, engineering training methods from a scientific approach. Interestingly enough, Landy became the new record holder only six weeks later with a time of 3 minutes and 58 seconds. Since then, the mile-time has reduced to 3:43 and over 1,000 men have breached the four-minute ‘brick wall’. Sports science reporter, David Epstein argues, however, that only around half of those men would have succeed on the cinder trail surfaces of Bannister’s generation. Biomechanics estimate that modern synthetic tracks retain energy significantly more efficiently and improve results by 1.5%. Not only had Bannister’s achievement lift the psychological façade of impossibility surrounding the four-minute mile, but also his application of technology and science in sport had served as factors which would continue to pave the road towards challenging human limitations.

Since the 1970s, neither horses nor greyhounds have gotten any faster. Despite the many incentives that exist to do so, a limit has seemed to have been reached in terms of the purpose they were bred for. With the record for the marathon held at 2:02:57 by Kenyan runner, Dennis Kimetto in 2014, many believe we’ve reached the peak our body’s served functionality. Claims of impossibility grew commonplace, and once again a psychological resignation began to shroud the boundary of the two hour marathon. An author from “The Science of Sport” even offered Dr. Andrew Bosch $1000 if it is surpassed before 2019. Though, with the inconceivable growth of technological advancements within the past decade, these claims seemed to hold greater credibility.

​Bannister’s mile-breaking record represented a 0.6% in improvement. The greatest sprinter of our generation, Usain Bolt, improved the world record for the 100 meter sprint by a substantial  1.7%. Clocking a sub-two hour marathon speed demands a change of 2.4%. For past 15 years there has already been a 2% increase in marathon performance, yet this new effort essentially calls for a result twice in magnitude of Bolt’s achievements in addition to already existing improvements. The maturation of the sport over the last century has pooled the greatest athletes not solely from their physicality, but more importantly from their genetics as well. Meticulous training programs are ingrained in those already possessing the advantageous traits of compact torsos coupled with longer, thinner legs, also known as Kenyans, and so these features have quite literally naturally selected the elite runners of today.

​With an endeavor already so developed, it’s difficult to foresee any interventions which could overcome its demanding requirements. Fortunately, a recent project by Nike has already met nearly all of them. Here’s the story of how science and technology has allowed long-distance Kenyan runner, Eliud Kipchoge to position the world within 0.35% of the goal and how Dr. Andrew Bosch may just get the $1000.

From optimizing course quality, weather, pacing, efficiency, and, of course, footwear, Nike’s ‘Breaking 2’ project leaves no detail unmanaged. Three long-distance runners, all originating from East Africa, represented the campaign and followed a meticulous year-long training program covering all these aspects. The official trail marathon was done on Monza’s Formula 1 Grand Prix Course. The path was completely flat and oval-shaped in order to conserve energy through gradual turns rather than introducing sharp changes in direction. The location of Monza in particular held ideal conditions, with an average temperature of 53F, low wind intensity and reasonable elevation of 600 ft above sea level.

For pacing, electric cars lead six meters ahead and emulated the speed of a sub-two hour marathon. Normally, specialized ‘pacer’ runners are interchanged in intervals in order to guide individuals throughout an entire race. Nike applied fluid dynamic studies and aerodynamic modeling in order to arrange the pacers in a formation that would minimize the wind resistance placed on the main three men-truly every millisecond was account for. The company explains that at the core of all the adjustments made in biomechanics, coaching, nutrition, and sports physiology lies technology, especially the ones integrated into their ground-breaking running shoe.

​Our legs are actually pretty inefficient, utilizing only about 45% of the power generated to push us forward while the rest is released into the air as our foot contacts the ground. Nike’s ‘Zoom VaporFly Elite’ was engineered to maximally conserve that dissipated energy. Parting from conventional thin, low-profile distance racing shoes, the Vaporfly carries a heightened midsole cushion that’s incredibly light, supporting both responsiveness and energy return. The offset heel-to-toe height and curved carbon fiber plate act to prevent excess strain in the Achilles. Customizing singlets, shorts, and even armbands, each piece was tailored with specific compression levels, ventilation locations, and materials to reduce drag. 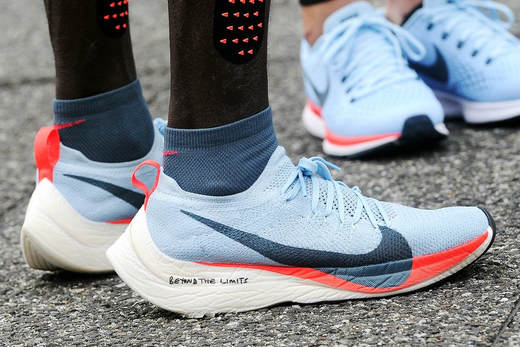 Form truly follows function, and on May 6th, 2017 Kipchoge finished with a record time of 2:00:25. Although the two-hour barrier remains, the project could never be labeled as a failure and it will only continue to progress. For those marking ‘Breaking 2’ as an irrational moonshot, Kipchoge states after the race, “The next generation should know that nothing is impossible in this world. Real focus, determination and real hope, can take you somewhere.”

​ Track coach and co-founder of Nike, Bill Bowerman asserts that the purpose of running is not victory but rather it’s to “test the limits of the human heart,” and the evolution of technology has allowed that limit to remain ambiguous. If you were to deliver an electric shock throughout someone’s body, they would nearly jolt across an entire room-that is the power and capability of the human body. But our brain inhibits such activity due to perceived threats injury. Continued success towards the most ambitious envisions of human performance rely on engineering the body’s ability to approach seemingly threatening boundaries. Nike’s team challenges the assumption that we’ve arrived at the summit of our body’s functionality, and one can only wonder if a definitive threshold to our physical capacity would ever be accepted.